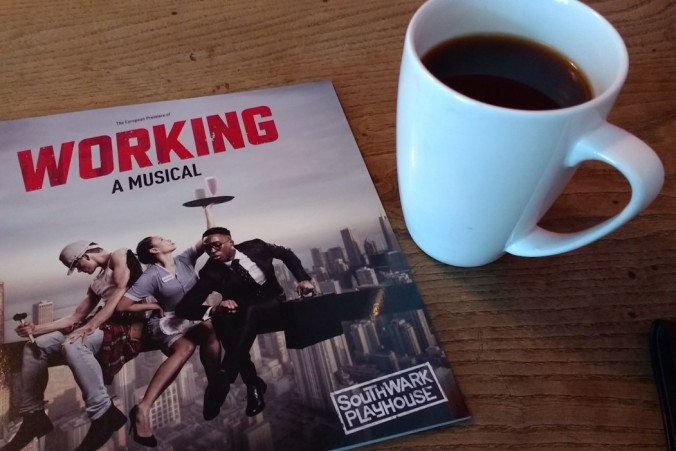 This could so easily have been the dreariest show imaginable. Working is a plotless musical with a piecemeal score supplied by a handful of different songwriters, based on Studs Terkel‘s seminal 1974 book of oral histories about life in the American workplace. It’s not a book that seems to cry out to be adapted as a musical, particularly given that it doesn’t follow anything you’d recognise as a traditional narrative and it doesn’t focus in on any single leading character. As adapted from Terkel’s book by Stephen Schwartz and Nina Faso, it’s essentially a series of vignettes: a selection of songs and monologues, each delivered by a different character, with a kind of dramatic through-line but no “story”, based on real-life interviews in which people talk about their work, how they feel about it, and how (or whether) it defines them.

And it’s wonderful. Having a multitude of composers supply two or three songs each is an approach that really shouldn’t work, but it does here: these are terrific character monologues set to music by composers ranging from the late Mary Rodgers to Lin-Manuel Miranda, with simple, direct lyrics drawn directly from Terkel’s interviews. This isn’t quite verbatim theatre along the lines of London Road or Committee; the songwriters here (who also include, aside from Schwartz, Susan Birkenhead, Craig Carnelia, Micki Grant, and James Taylor) craft lyrics from the text in the interviews instead of setting reported speech directly to music. The result is a startling, moving, warmly real collection of characters – ordinary people, portrayed without cliché, looking for meaning in ordinary lives. So often, musical theatre trades in the larger-than-life – big characters painted in broad strokes. There’s none of that here, and no tap-dancing either,* and the show is all the better for it. 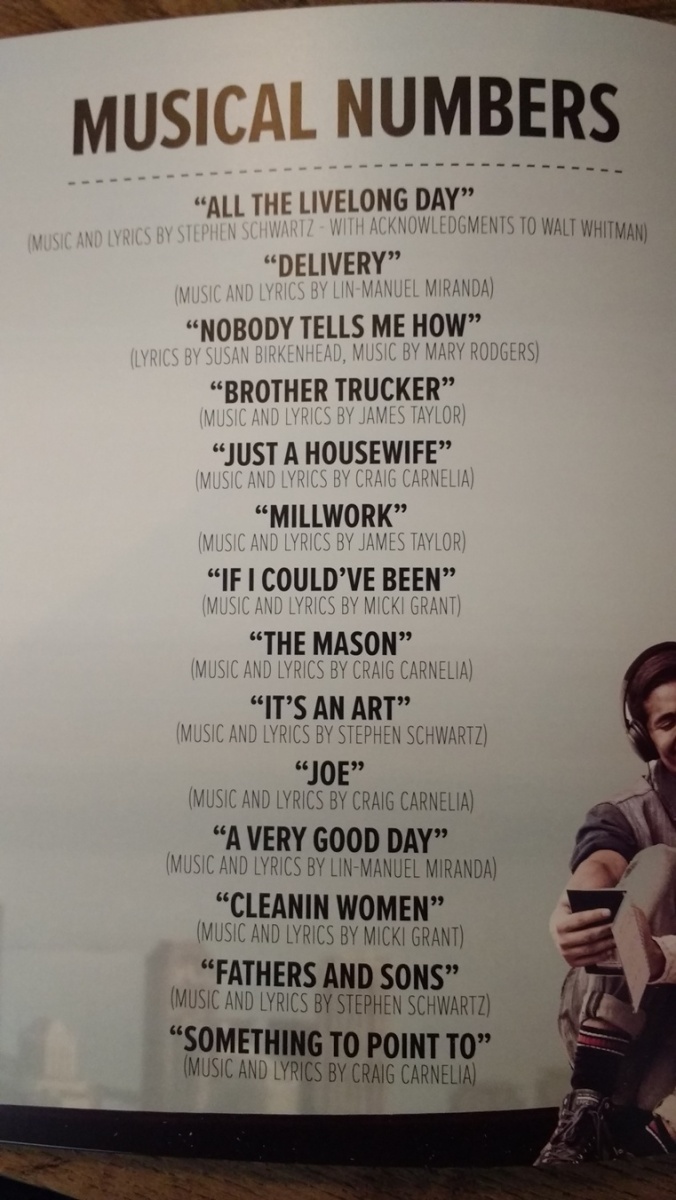 The six leading actors all play several characters, and they’re all superb. The brilliant Gillian Bevan is sensational as, among other things, a public school teacher reflecting on how teaching has changed since her career began four decades previously and a waitress who finds tremendous pride and dignity in her work. Krysten Cummings finds huge emotional depth in the affecting “Just a Housewife”. Dean Chisnall throws himself into “Brother Trucker” with unrestrained glee, then later delivers a devastating monologue – which takes on a new immediacy in the wake of the horror of Grenfell Tower – as a firefighter considering the reasons he chose such a dangerous career. Siubhan Harrison delivers as good a performance of James Taylor’s “Millwork” as you’re ever likely to hear, and Liam Tamne finds all the comedy in his collection of young/callow characters, and especially in a monologue as a spoiled brat who gets fired from his first job for gross insubordination. Towering above them all is Peter Polycarpou, offering a masterclass in character acting as he shifts personas at the drop of a hat (or rather, at the punch of a time-card).

The show’s ensemble is made up of half-a-dozen straight-out-of-drama-school performers making their professional debuts, and they’re wonderful, but they aren’t given enough to do. A couple of weeks ago, I saw Miriam-Teak Lee give a flawlessly hilarious debut production in On The Town in Regent’s Park. The six young actors here – Patrick Coulter, Nicola Espallardo, Izuka Hoyle, Luke Latchman, Huon Mackley, and Kerri Norville – are clearly all immensely talented, and their movement, via Fabian Aloise’s character-derived choreography, gives the show much of its energy. In too many scenes, though, they are more or less relegated to singing backing vocals, and that’s a pity. Luke Sheppard’s direction keeps them (and everyone else) moving at a good clip, but you’re left with the impression that they could have been allowed to contribute more. Sheppard does a great job of making the show’s lightning-fast transitions between characters and stories admirably clear, Jean Chan’s blue-collar industrial set provides a fitting backdrop, and the show looks great under Nic Farman’s understated lighting, particularly considering the tiny budget. It might be nice to have more than six musicians – but at this size of venue, at these prices, six is a luxury, and the band sounds great under Isaac McCullough’s sensitive musical direction.

If there’s anything to fault, it’s in the material itself, or rather in how this version of the show was constructed. Terkel’s original book appeared in 1974, and the musical, based on the interviews in Terkel’s book, began development in 1975 and opened in 1977 (there’s a helpful timeline in the programme). Lin-Manuel Miranda, the youngest of the show’s various songwriters, was born in 1980; a revised version of the show was developed between 2009 and 2011, based on new interviews conducted by Stephen Schwartz in 2006-7. Miranda’s two songs are excellent, and sound perfectly in keeping with the rest of the score, and “A Very Good Day”, sung by two underpaid caregivers, is one of the show’s great highlights – but the world of work changed a great deal between 1974 and 2006, and the show doesn’t quite manage to negotiate the transition between then and now. As the (intermissionless) performance moves towards its climax with Craig Carnelia’s closing “Something To Point To”, you may well feel a couple of chapters have been missed along the way.

That’s a minor quibble, though, because in most respects the production is an absolute triumph. Whether it will get one is anyone’s guess, but it certainly deserves a longer life; there’s a rumour that a cast recording may be in the offing (or at least, Peter Polycarpou apparently mentioned in a radio interview that a live album was being made), and if the show’s producers are listening, I will buy a copy the second it comes out. Luke Sheppard’s production makes a strong case for this show as a neglected classic, and the performances are simply flawless. Once again, the Southwark Playhouse comes up trumps: they work on a shoestring, but this is probably as good a musical production as you’ll see all year.

*I don’t hate tap-dancing. Really. I’ve a ticket to see 42nd Street later in the year. I even paid for it myself.

One thought on “America singing”