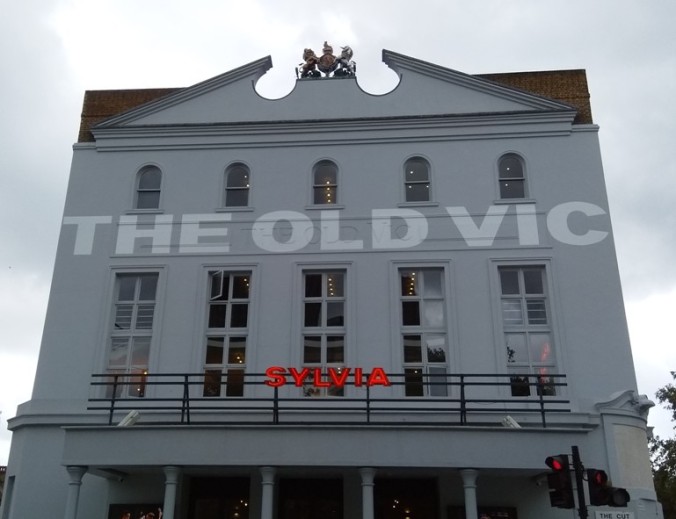 Sometimes the showbusiness Gods smile, and sometimes they don’t. It’s fair to say that Sylvia, a hip-hop musical about Sylvia Pankhurst commissioned as a coproduction between ZooNation, Sadler’s Wells, and the Old Vic, has had an unusually difficult birth. Originally intended as a dance piece, the show apparently morphed into a full-scale through-sung musical during the developmental process; rehearsals were then hit by illness among the cast, early performances in the show’s relatively short run were presented either incomplete or in concert form, and at least one performance was cancelled altogether. As a result, the entire run ended up being labelled as previews, even though the press did eventually review the show, and the (very large) title role was performed by an understudy for most of the three-week run. Programmes were sold with this insert tucked inside the front cover, and patrons were also handed a copy, along with a slip announcing the appearance of an understudy in the leading role (pay attention, Bridge Theatre, THAT’s how you do it), as they entered the auditorium:

You could be forgiven, after reading this, for expecting a train wreck. What a pleasure it is, then, to be able to say that this show, with a few tweaks, has the potential to be a big, big hit. Given that it’s still work in progress, though, it perhaps wouldn’t be fair to write a full, detailed review (also it’s been a long week and I’m going cross-eyed in front of the computer screen). So… random thoughts:

Overall, Sylvia is very nearly a major triumph. Despite a production process in which it seems nearly everything that could have gone wrong did, it’s an exciting show with enormous potential. If I was producing it, I’d get a concept album out as quickly as I could – this music has huge crossover potential, and the show, as I said, deserves to be a huge hit. Provided Prince and her collaborators don’t throw out the baby with the bathwater when they’re revising the show after this tryout run, it easily could be.

Oh yes, and one more thing: when I rule the universe, and the day will come, people who check their text messages in the theatre while the lights are down will be duct-taped to the front wall of the theatre building by their pubic hairs and left there as a warning to the world. Yes, I’m talking to YOU, Mr. Twentysomething Entitled Arsehole sitting to my left during Act One (he left at intermission). It’s a theatre, not your living room; light bleeds a surprisingly long way from phone screens, it’s very distracting, and we all paid to watch THE SHOW, not your childishly theatrical affectation of boredom (granted, you are probably a product of your upbringing; I assume the lady sitting to YOUR left was your mother, and her manners also wouldn’t have won any prizes). If you can’t behave in public like a civilised adult, please do us all a favour and stay home.